After 548 hours decreases the activity of a radioactive substance to 1/9 of the initial value. What is the half-life of the substance? 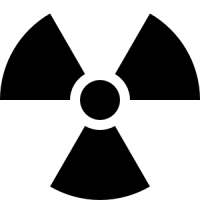