clock face is given. Numbers 10 and 5, and 3 and 8 are connected by straight lines. Calculate the size of their angles. 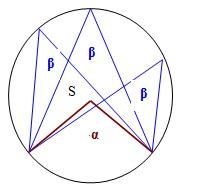