Trams have an average speed 23 km/h and run in tact 14 minutes. Pedestrian walking speed is 3.3 km/h. At what intervals trams outrun pedestrian? 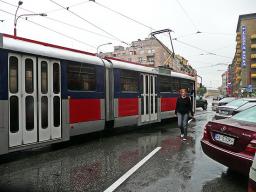