Father is 44 years old, his son 16 years. Determine how many years ago was the father five times older than the son. 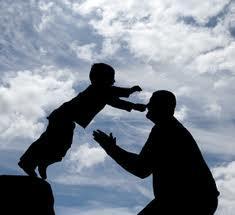