Pepa circles the track in 36 seconds. Kamil in 42 seconds. They started together. How many seconds will meet again at the start? 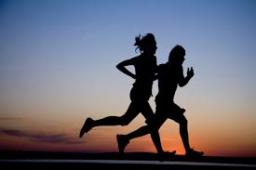