If the general sorts troops into the crowd by nine left 6. How many soldiers has regiment if we know that they are less than 300? 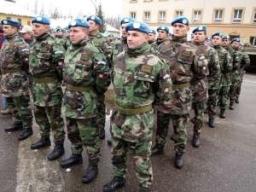