Daddy is a 46-year-old, and his son is at the age of 16. When (which year) was/will daddy five times more years than his son? 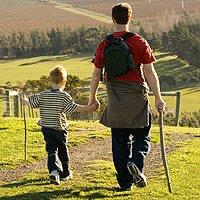