Karel pulled the balls out of his pocket and divided them into groups. He could divide them in four, six, or seven, and no ball ever left. How little could be a ball? 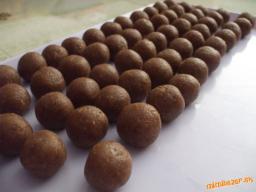