When Ben is so many years old to Adam today, Adam will be 23 years old. When Adam was as old as Ben, Ben was two years old. How old is today Ben and Adam? 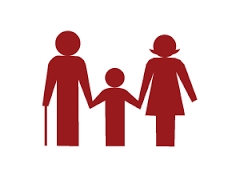