I think a number. When I multiply it by five, and after that I subtract 477, I get the same number as if I multiplied it twice. What number do I think? 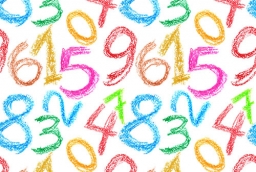