In the box are 8 white, 4 blue and 2 red components.
What is the probability that we pull one white, one blue and one red component without returning? 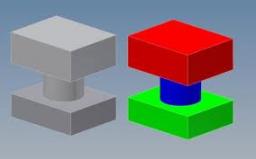