Our house would paint four painters in 14 days. How long could it paint five painters? How long will it take if two other painters will come to help after 5 days? 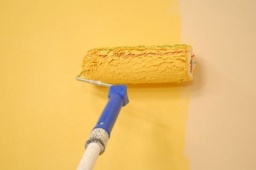