The horizontal distance between municipalities is 39 km. Average sinking is 7 per mille. What is the difference in height between these municipalities? 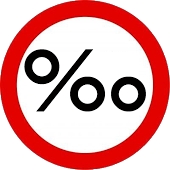 Tips to related online calculators
Our permille calculator will help you quickly calculate various typical tasks with permilles.
Do you want to convert length units?