The two masters will make as many parts as five apprentices at the same time. An eight-hour shift begins at 6 o'clock. When can a master finish the job to produce just as much as an apprentice for the whole shift? 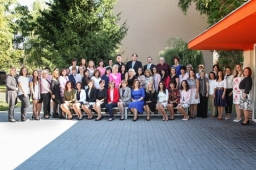