There were 560 people in the cinema. 35% of them wore glasses. Of this number, 25% were women. How many men wore glasses? 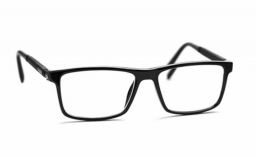