On the circus performance was 150 people. Men were 10 less than women and children 50 more than adults. How many children were in the circus? 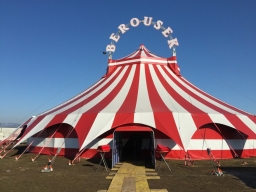