How many cubic meters of water will flow in 1 hour from pipe A and how many from pipe B? 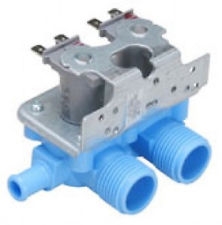