Calculate the size of the third angle. 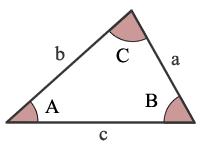