For 136° angle calculate size of adjacent angle on one side of a straight line. 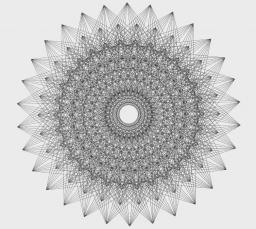