In the three-part tram went 206 passengers in front of others, 226 after others and in the middle half of all.

How many passengers went in tram total? 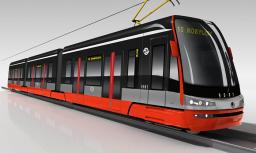