From the five girls and four boys teachers have to choose one pair of boy and girl. 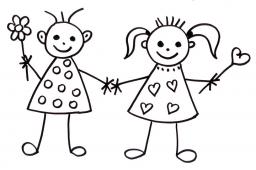