Two pupils painted the class in four hours. How long will it take for six pupils? 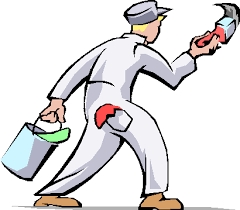