In the container are 45 white and 15 balls. We randomly select 5 balls. What is the probability that it will be a maximum one green? 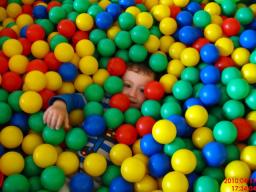