I have as many brothers as sisters, and each of my brothers has twice as many sisters as brothers. How many children do parents have? 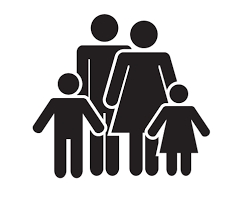