The tourist cottage has 11 rooms for 16 guests, some of them are doubles, some singles. How many are double rooms and how many are single rooms? 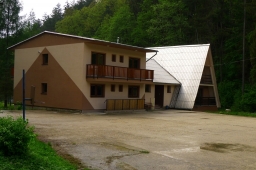