Mom baked a third of plum jam cakes, one third cheesecakes and 18 poppy. How many cakes she had bake? 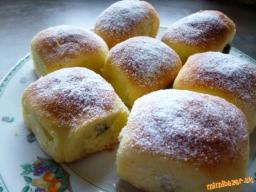