Five girls are traveling by bus. Each holds in each hand two baskets. In each basket are four cats. Each cat has three kittens. Two girls exit the bus. How many legs are on the bus? 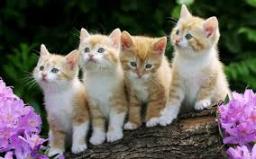