In the store has 168 chocolates, caramel candies 224 and 196 hard candies. How many packages we can do and how many of candies will be in each package? 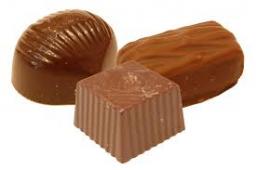