We bought 140 fruit, 196 chocolate and 84 caramel lollipops. How many of the same packages can we prepare from them? 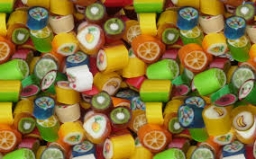