The school stands 110 m from the church, which is 100 m beyond the town hall. Which building are closer to the church and how many times? 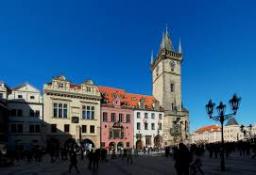