How many apples were originally on the tree, if the first day fell one third, the second day quarter of the rest and on tree remained 45 apples? 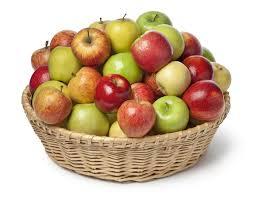