5 of the same bread has the same weight as three bread and 4 kg of fruit. What weight has one bread? 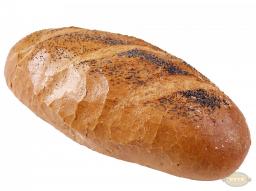