The division has 18 members: 10 girls and six boys, two leaders. How many different patrols can be created if one patrol is two boys, three girls, and one leader? 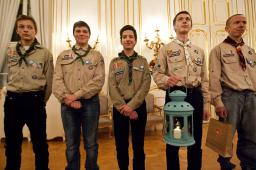