Sick Marcel already taken six tablets, which was a quarter of the total number of pills in the pack. How many pills were in the pack? 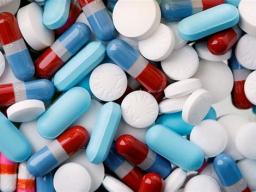