The excavator dug 40% of the excavation in 2 hours 20 minutes. How long does it take him to dig the whole ditch? 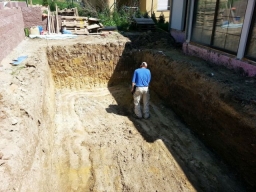