Find the area of an isosceles trapezoid, if the bases are 12 cm and 20 cm, the length of the arm is 16 cm 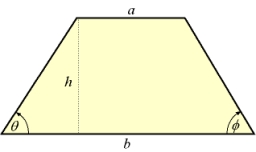