If 200 units of a commodity are consumed in a first year, and if the annual rate of increase in consumption is 5% 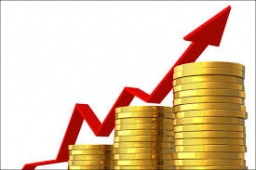