Performances of two machines are in a ratio of 7:12. A machine with less power produced 406 pieces of products per shift. 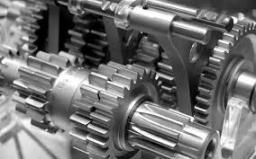