Earth is 150 million km away from the Sun, 300,000 km of sunlight travels in 1 second. How long will the light come from the Sun to the Earth? 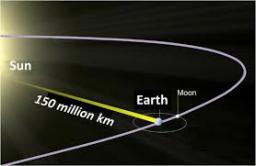