How many chicks were hatched from 4500 eggs, when an average of 100 eggs hatched 87 chicks? 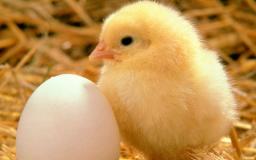