The average GPA is 2.78 with a standard deviation of 4.5. What are students in the bottom the 20% having what GPA? 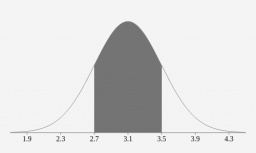