Three years ago, the triplets Pavel, Petr, and Luke, and their five-year-old sister Jane had together 25 years. How old is Jane today? 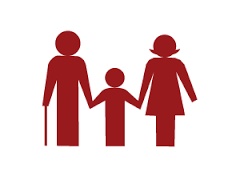