How many bridge hands are possible containing 4 spades,6 diamonds, 1 club, and 2 hearts? 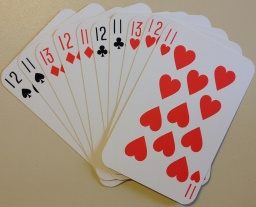