We throw 10 times a playing dice. What is the probability that the six will fall exactly 4 times? 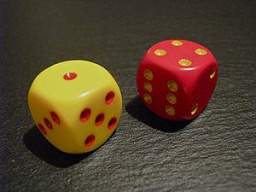