Prove that the sum of all inner angles of any convex n-angle equals (n-2) . 180 degrees. 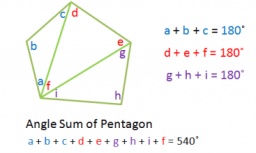