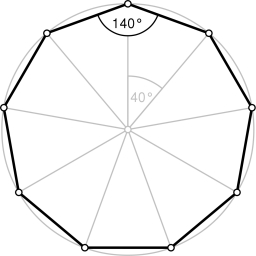 Matematik
try to start with angle 360/9 = 40°... Draw nine isosceles triangles with base a=4 cm and opposite angle 40°.
Or if you may calculate diameter of described circle - draw a circle and divide it into nine equal segments. (divide by 40° angle)
1 month ago  Like