A circuit has an input power of 58 mW. Its output power is 6 mW. What is the loss in decibels? 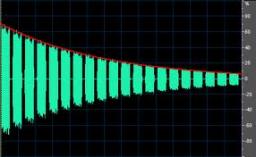