From a square with a side of 30 cm, we cut the circle with the highest possible diameter. How many percents of the square content is this circle? 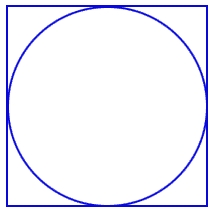