The landlord has a square lake. Trees grow around this lake. The lake wants to enlarge the pond twice and not cut down or flood any tree.

How will he do that? 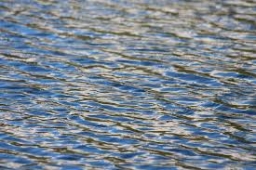