Michal said to Martin: give me one ball and I'll have twice as you. Martin said: give me 4 and we will have equally.

How many balls each have? 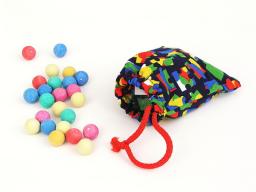